While the Four Intentions work we looked at in my last blog post helps a horse learn to remain calm under pressure, we can take that development even further with other exercises that build the horse’s confidence to the point where he moves beyond calm and actually becomes brave. One way to do this is to work on teaching the horse that he can “control” something you know is likely to make him a little bit nervous, such as a moving tarp. I like to start this work on the ground with me leading the horse, then repeat the same exercises mounted. In both instances you will need a helper, ideally someone mounted on a horse that is quiet, calm, and confident, but if your helper is on foot, that is okay.

I start the tarp exercises by asking my horse to follow a tarp tied to a rope being dragged by the helper, though my eventual goal is to have the horse comfortable being followed by the tarp or dragging it. If you try to start by having the tarp follow the horse or comes towards him, that is likely to push him into a self-preserving mindset, as it is a natural response for the horse to flee from something frightening. We want to change things up and put the horse into an empoweredmindset, which we can do by having him follow something he would normally fear. This encourages the horse’s innate curiosity and makes him feel like he is in control. 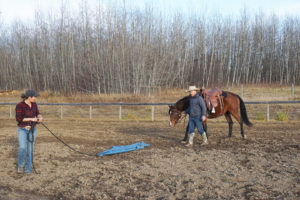 I like to start this exercise by having the horse follow a tarp being pulled by a helper. Being in this position helps the horse investigate a new thing while still feeling in a position of control.

In the beginning, allow the horse to follow the tarp at whatever pace he feels comfortable with, and don’t try to force him to get too close. Simply support the horse to follow the tarp, keeping your seat and hands soft and relaxed (if mounted) and letting your own confidence flow through to your horse. You want to create a sense for the horse that he is making the tarp move away, which will give him a feeling of control. What tends to happen with horses is that once they believe they can control something, they soon come to believe that they don’t need to, as a controllable thing is not scary. 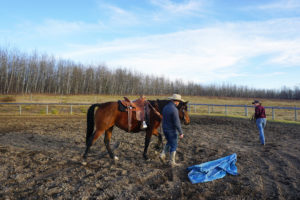 Gradually bringing the horse up alongside the tarp pushes the horse’s boundaries a bit, which is a necessary part of building confidence. Remember though, that you want to avoid pushing the horse into a fear mode where he feels he needs to leave.

For the next step, move up to walking next to the tarp for a bit, then circle back to follow it again if your horse starts to worry at any point. If you are doing this exercise with your horse in hand, keep yourself between the tarp and the horse so that if the horse feels the need to move away from the tarp, he does not come over you. When walking next to the tarp is no longer a concern, move up to where the tarp is further back than the horse, once again rolling back to follow the tarp if needed. You can also opt at times to just stop your horse and let him watch as the tarp moves ahead of him or even circles around him, then follow it once again. When he is more relaxed, work again on having the tarp following behind him. 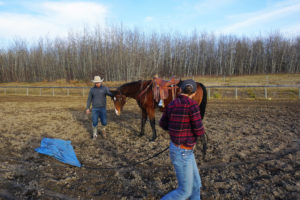 Sometimes, I will let the horse simply stand and watch as the tarp moves around him, then we go back to following it.

Continuing to change your horse’s position relative to the tarp like this will allow mental progression by upping the ante to a degree, but then relieving that pressure by circling back to a position of strength, proving to the horse that he is still in control. The idea is not to force the horse into confronting the scary thing, which can actually intensify his fear, but instead to put him in a position of power that eliminates his fear from within. This allows us to push the envelope more and more as the horse’s confidence grows, which I believe is a necessary progression in order to produce a safe, self-assured equine partner. If we don’t raise the stakes and help the horse work that through in a positive way, he will always remain too close to his self-preserving instinct, which can get both the horse and his rider into real trouble when he feels the need to act on his fear. 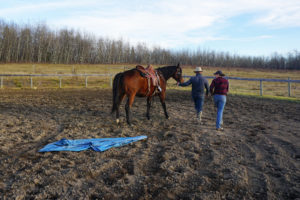 When the horse is getting comfortable with the first exercises, I gradually let the tarp drift further back until it is following the horse.