NOTE: Josh has a video demonstrating the entire process described in this article. You can watch it here, and don’t forget to subscribe to his YouTube channel for more great videos to come!

Spring is a time of year horse people usually look forward to, but with all the beauty and freshness that comes with it, we know that it won’t be long until all the irritating, biting bugs show up as well. If you have a young horse or one who worries about spray bottles, now is a great time to get out and work on teaching your horse to accept fly spray, before the bugs get too bad. Here is what I do to help a horse get over a fear of getting sprayed.

Horses can become worried by anything strange or unfamiliar, and from a horse’s perspective, fly spray is a triple whammy of weird. The horse has to contend with the sound the bottle makes, the feel of the spray, and the smell of the ingredients. The way I help them acclimate to this assault on their senses is to first teach them to soften to a slight downward feel on the lead. While it may look like I am asking the horse to lower its head, my focus is not on the placement or motion of the head, but rather on the release the horse is able to give. Be aware that horses can learn to lower their head without letting go of the mental and physical tension they feel, but that is lightness, not softness. When the horse actually softens, you will see the relaxation in their expression as well as their posture, and that is when you release your feel on the lead. 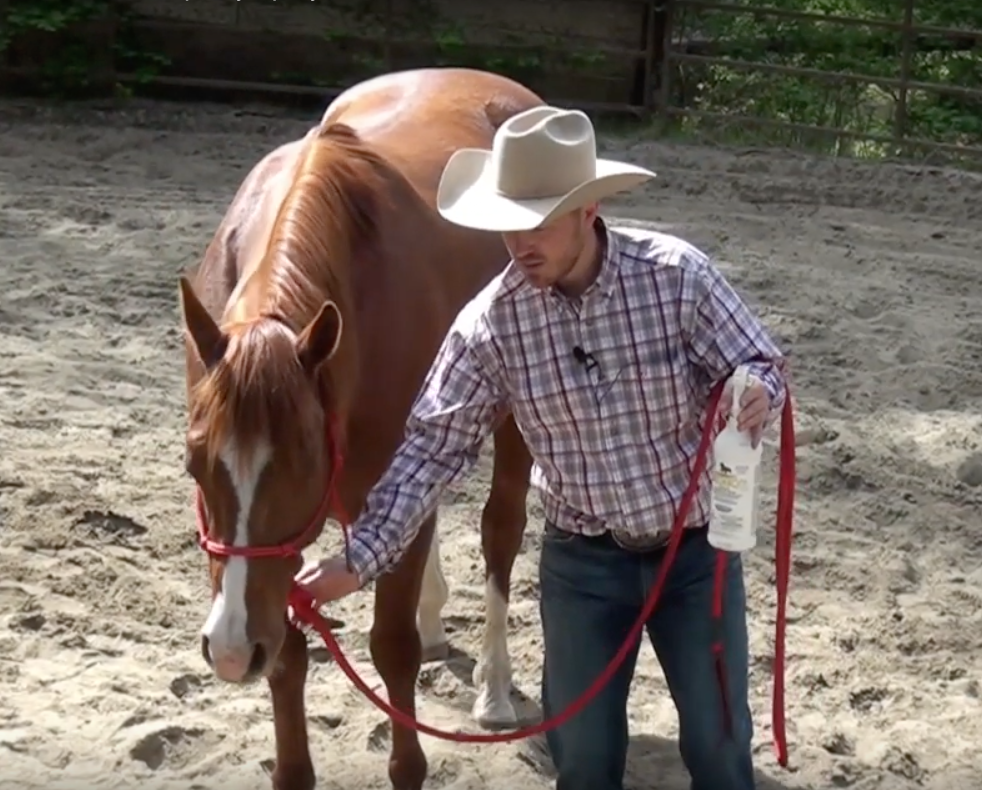 Before adding the sensory stimulation of fly spray, I want my horse to know how to soften to a light pressure on the lead.

Once the horse can soften like that, we work on softening to the same feel when a mild pressure (like a flag slightly shaking) is added at a distance, being sure to release that pressure the moment the horse softens. When you do this correctly, they quickly come to understand that they can “control” the pressure by staying calm and relaxed. This can help them think through new pressures of other kinds — like fly spray — in the same way. 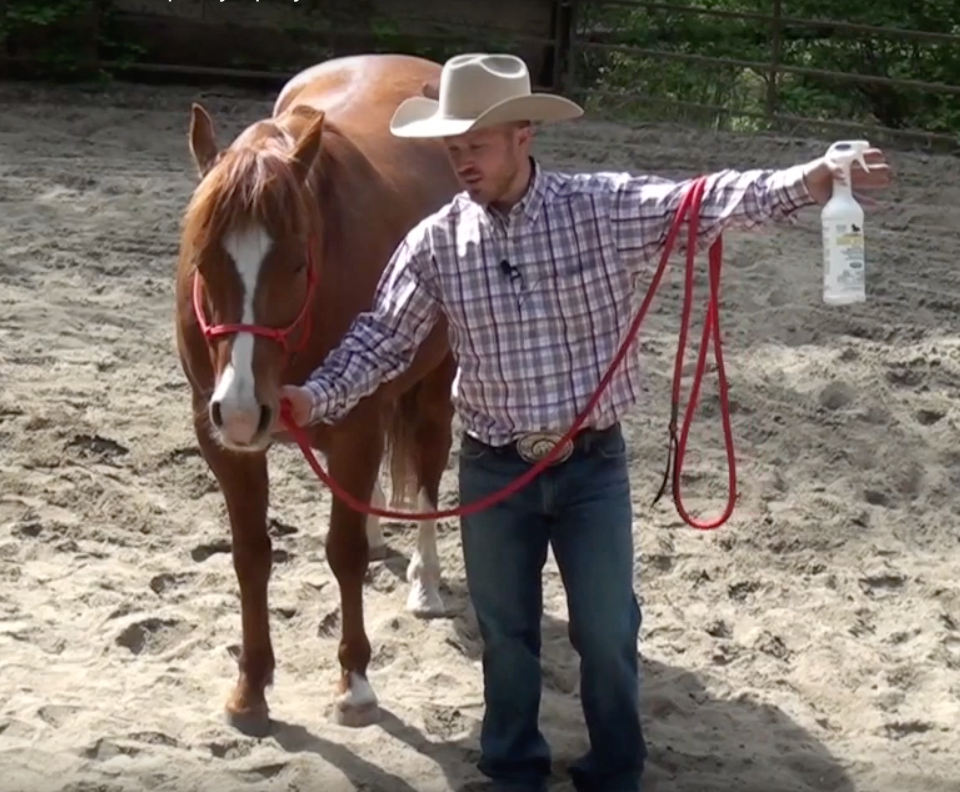 Start introducing the sound of the spray by holding the bottle away from the horse, then pump the spray and ask him to soften. Once he does, stop the spray.

The next step is to introduce a spray bottle as your “pressure”. Start off with just water in the bottle, as it has no unfamiliar smell and you won’t be wasting expensive fly spray. Begin by spraying well away from the horse, ask him to soften his head, then stop the spray when he does. Give him a break and some praise. Gradually work the spray closer to the horse, and work on things like rubbing the bottle on him with the same technique. Eventually, you get to where a bit of spray is touching one leg, you ask the horse to soften, then release and stop the spray when he does. If you time this well, your horse will believe that he stopped the spray by softening his head, and he will gain great confidence from this. Being able to “control” the spray makes it a lot less scary to the horse, and soon, you will be able to spray more and more of his body without him getting worried about it. 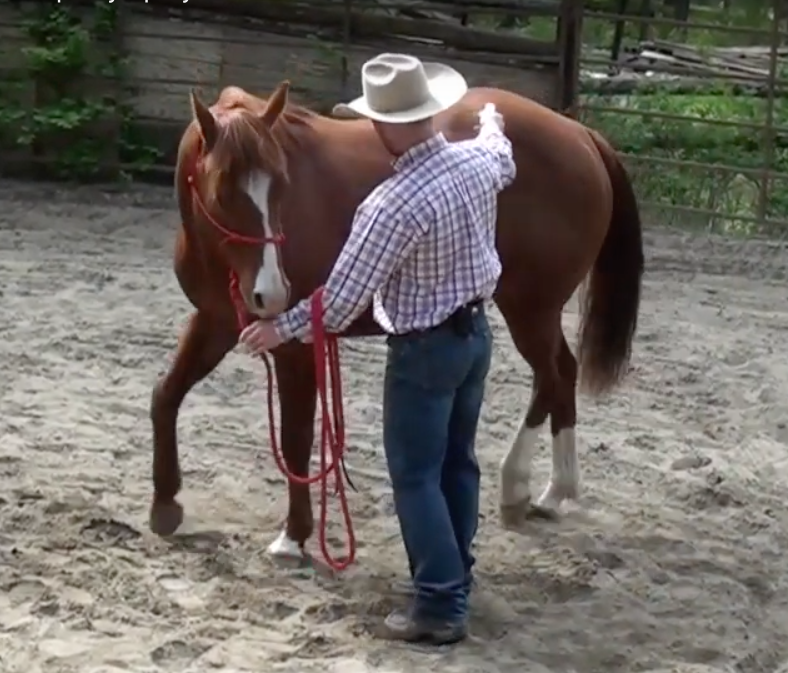 If the horse tries to move away from the spray bottle, just go with him and try to keep your pressures the same until he stops his feet and softens.

If your horse wants to move away from the sound, smell, or feel of the spray, don’t worry, as that is quite common. When the horse moves away, don’t try to stop him — simply go with him and try to keep your pressures (spray and feel on the line) the same until he stops his feet and softens to your request on the line. If the horse is being very reactive, putting a lot of energy into getting away and really pulling on the line, you need to back up and go through the earlier steps, and you might want to try breaking those steps into smaller pieces as well. For example, if just the sound of the spray bottle held at arm’s length sends your horse into a panic, try having a helper hold it further away and figure out where the distance is that the horse can tolerate. Once you have that established, you can work on gradually bringing the bottle closer, aiming to push the envelope just a bit with each attempt to get closer, but not so much that the horse feels the need to flee. Remember to always ask for softening before the pressure goes away, as that is what teaches the horse that relaxing is the answer, not running.

This “soften and release” method, where you remove a scary pressure/object in response to the horse softening, can be used for many things, including a horse that raises its head to avoid the bridle, or a horse that is afraid of clippers or being blanketed. Understanding this technique and how it empowers the horse to think through pressure, rather than forcing him to tolerate it, is an important step on the road to better horsemanship.